Katherine Dunn died in 2016, leaving behind the unpublished manuscript of her novel, Toad. This digital exhibit explores Naomi Huffman’s editorial process as she worked to bring Dunn’s novel to life and to print, appearing November 1st, 2022, by MCDxFSG. Working with Dunn’s original typescripts held at the Special Collections of Lewis & Clark College, Huffman revives Dunn’s singular voice and brings her darkly comic novel out of the archive and into the light to explore the dissolutions of youth, community, and gritty 1960s Portland to a new generation.

This section is the opening of the “Carlotta,” chapter, and provides the reader with early insight into Sally Gunnar as narrator. 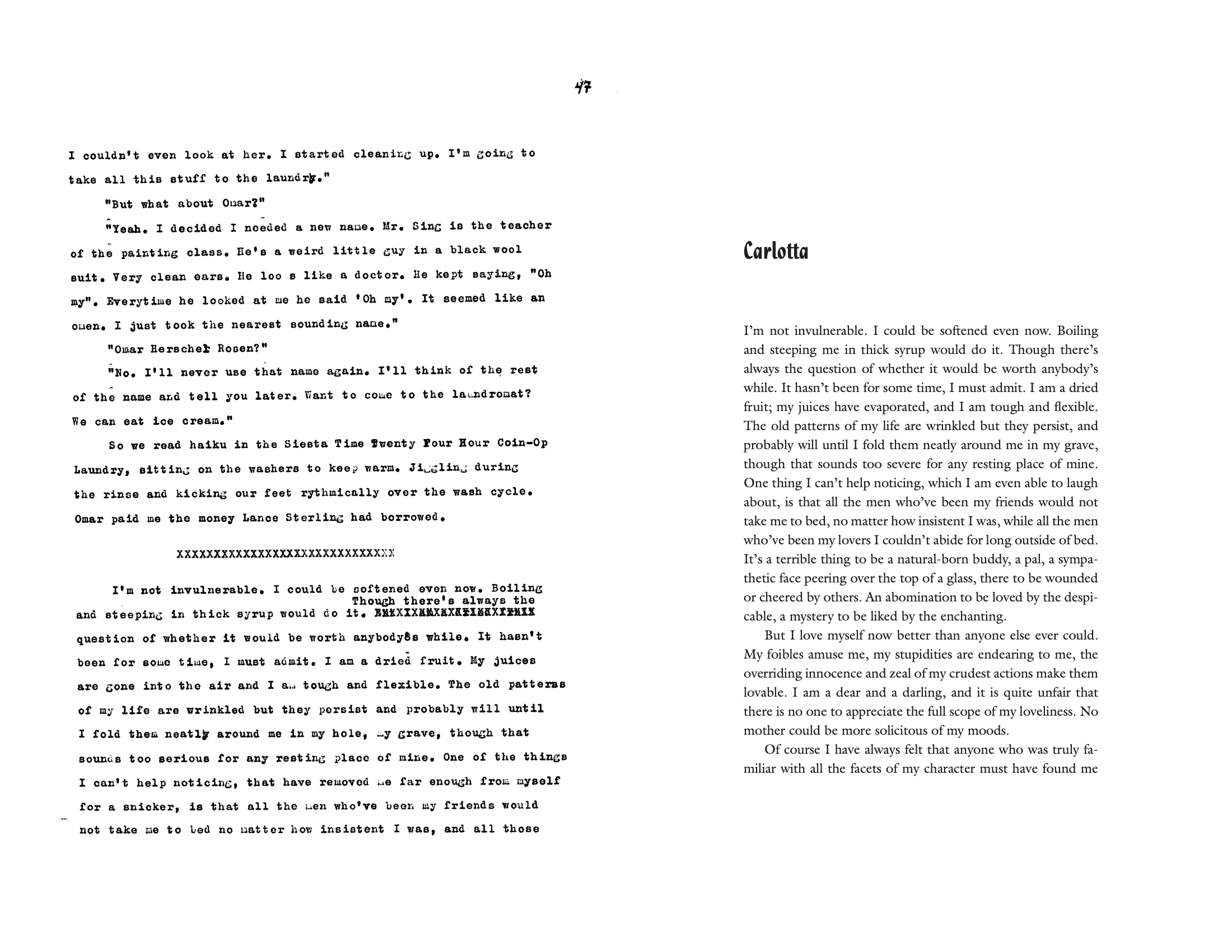 “I started with small changes. The manuscript lacked designated chapters, and I imposed them, creating titles that are irresistible but also summarize the story…Toad bears chapter titles like, ‘The raised blade,’ ‘The morning pill, bedtime pill, two o’clock in the afternoon pill,’ ‘The goddamn baby,’ and so on.” – Huffman 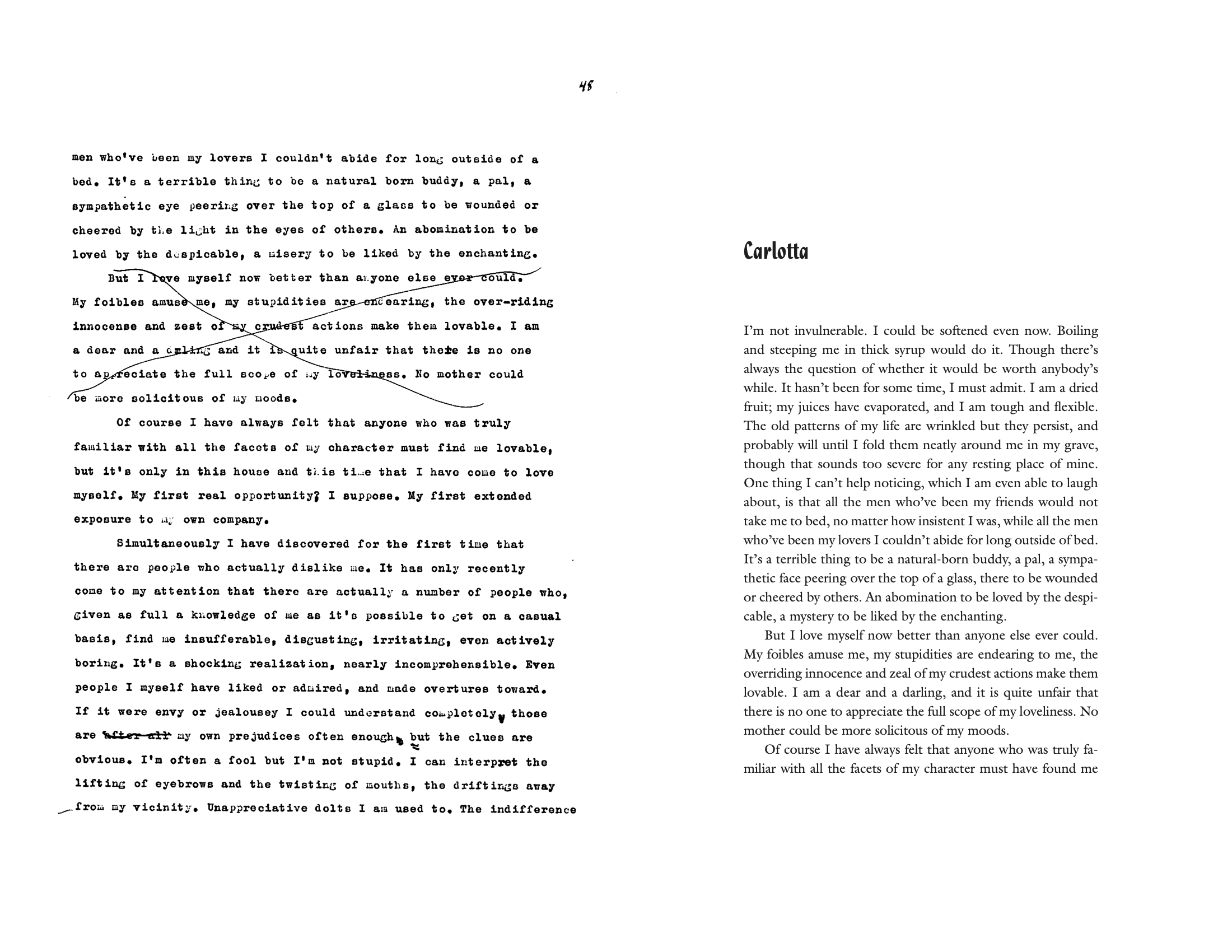 “Dunn occasionally crossed out her own rather lovely and lucid writing, such as the paragraph that begins, “But I love myself now better than anyone else ever could.” It seemed to me quite important to preserve this passage, lest readers confuse Sally’s frequent, and difficult to stomach, self-disparagement as the primary impetus for the experiment of her own self-exile. On the contrary, Sally’s great accomplishment is having carved, with great effort, a life of her own imagining—a feat every woman on earth would tell you requires a sharp sense of self-preservation and no small amount of self-love. So, the passage stays, and I believe it underscores and clarifies Sally’s powerful, and deeply personal, grounding philosophy.” – Huffman 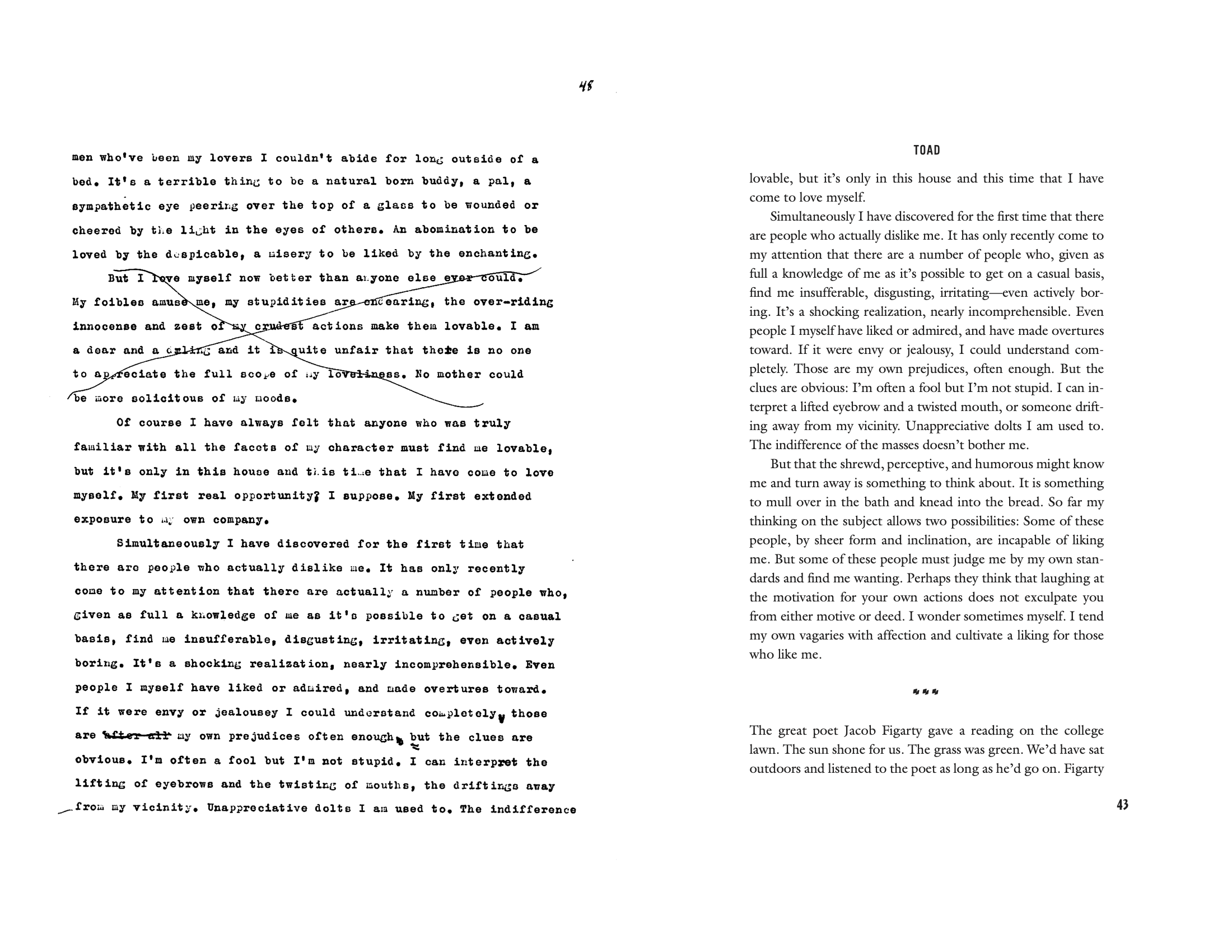 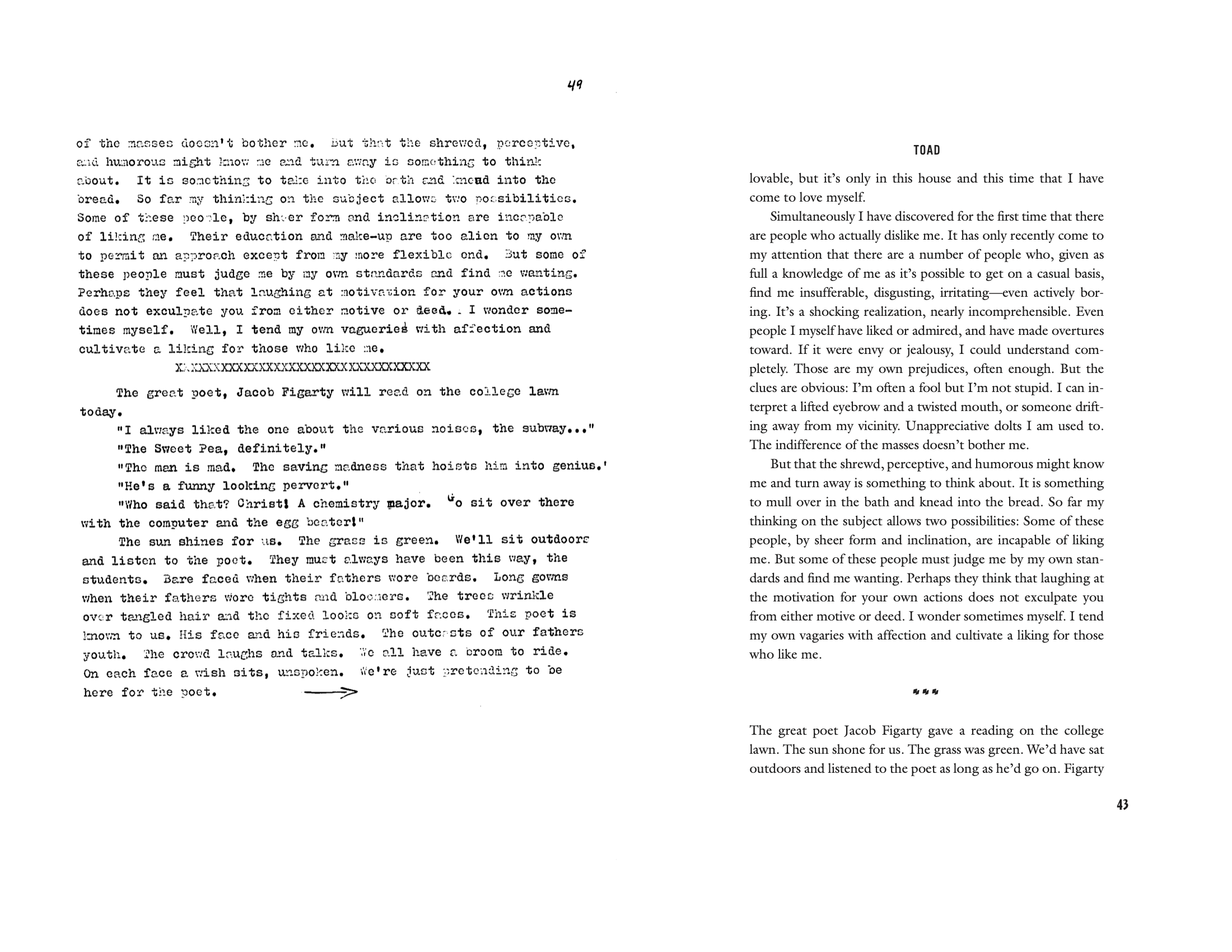 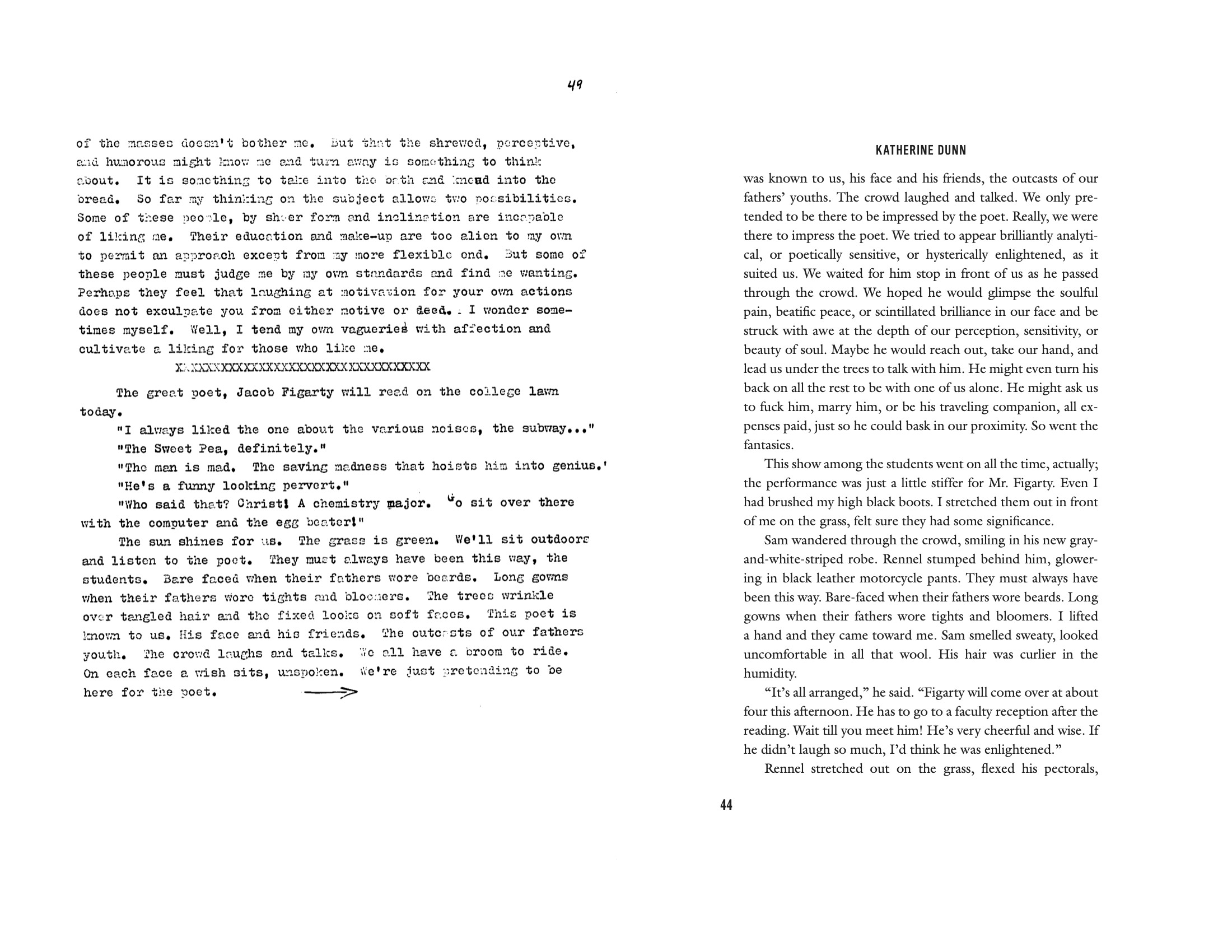 This meditative section occurs in “The scarred old toad,” and shows Sally Gunnar reflecting on her youth and her present meticulously crafted isolation. 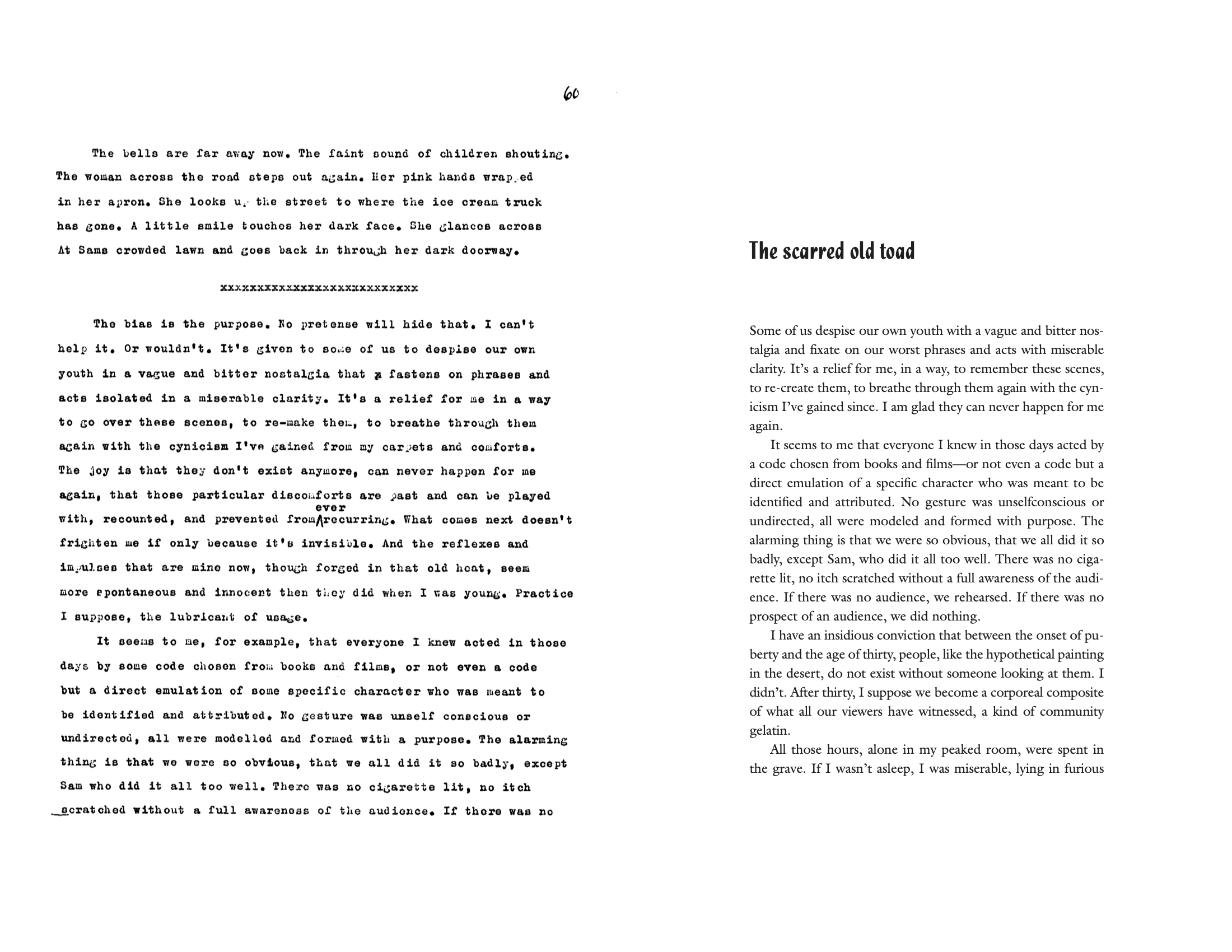 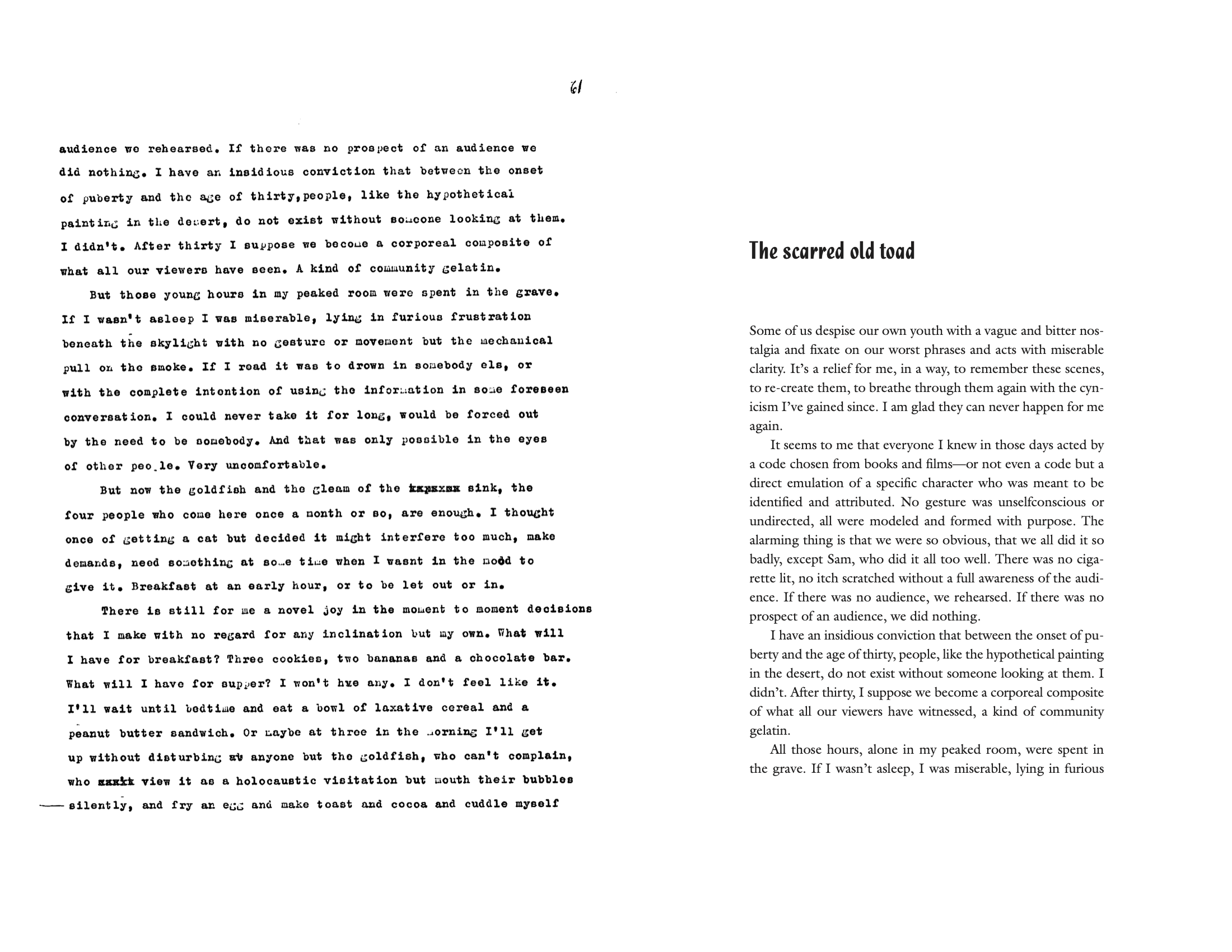 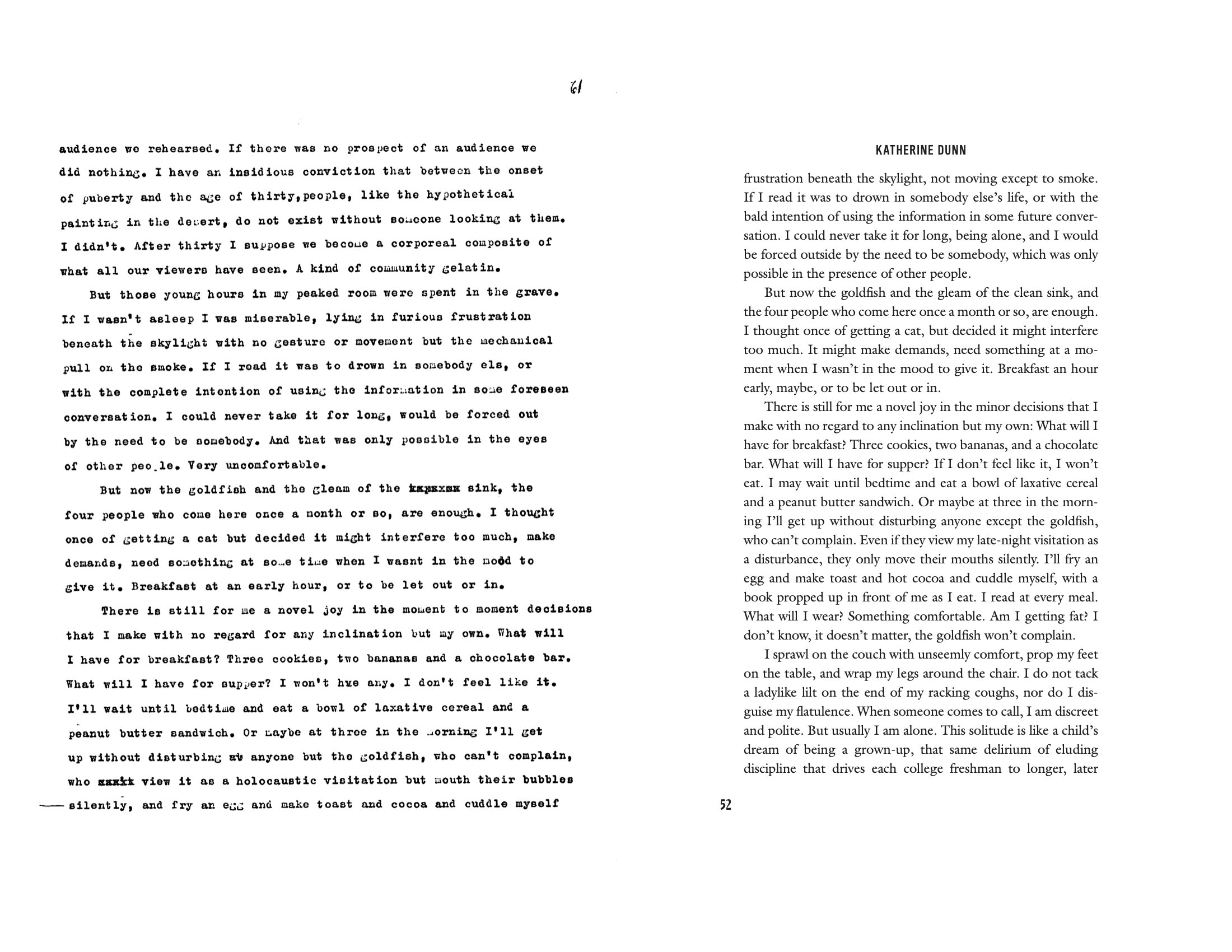 Replaces an x’d out word 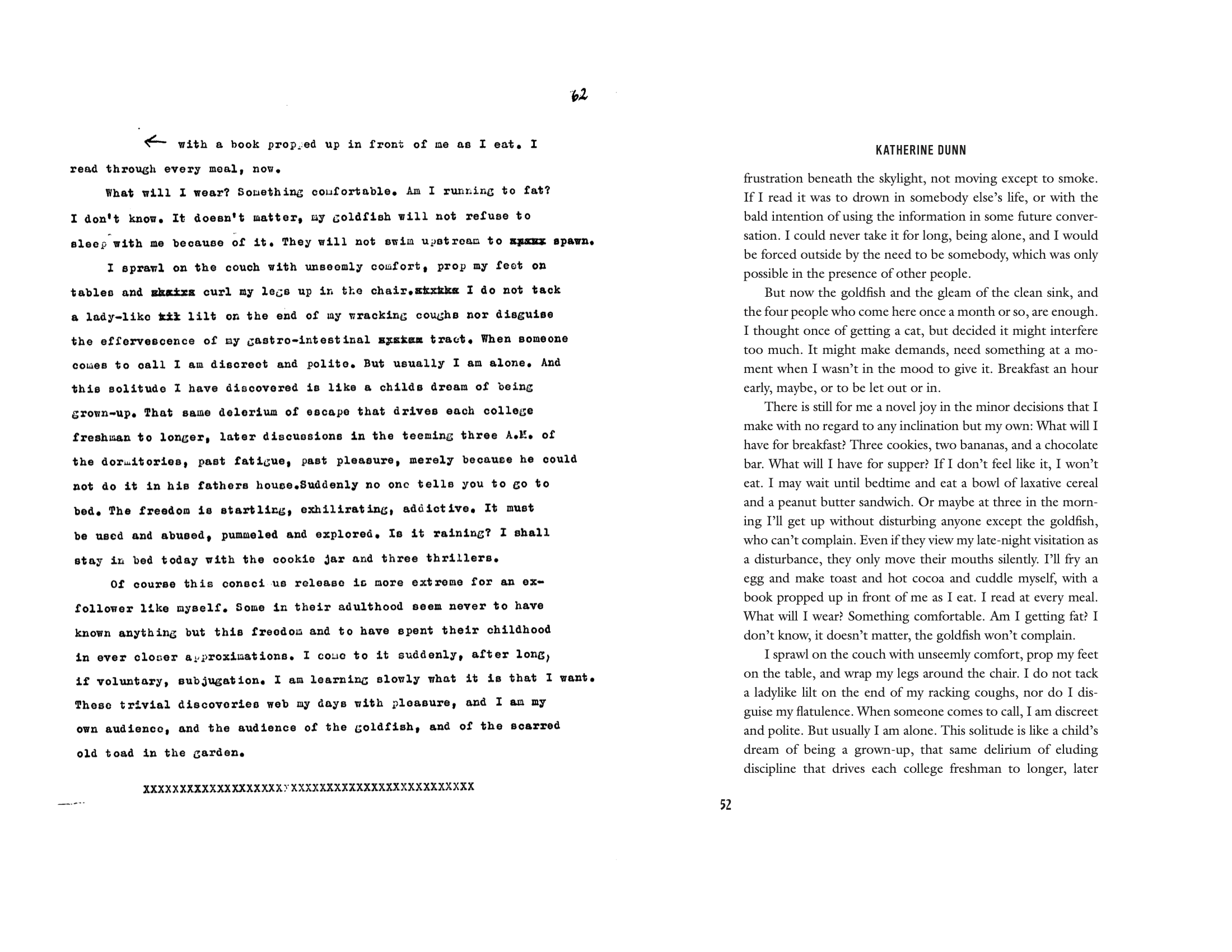 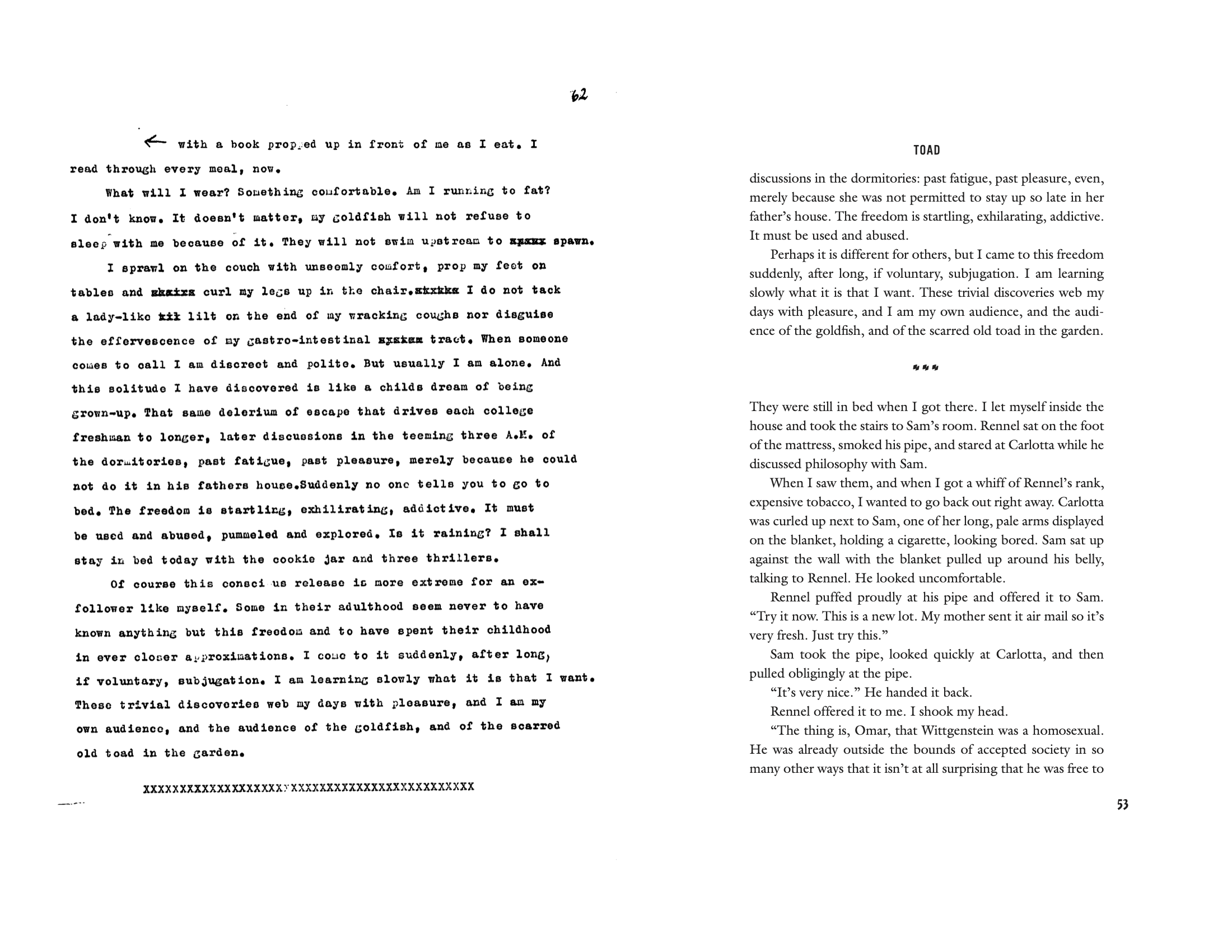 “As Toad’s structure began to emerge, I saw it was necessary to divide the novel into three parts, to more neatly arrange the story into what I saw as three discrete movements: Sally’s explanation of her self-imposed exile, and the introduction of Sam, Rennel, and Carlotta; Sam and Carlotta’s struggles to live off the land, and the birth of their son; and, finally, the loss that tears apart Sally and her friends.” – Huffman

The bringer of the first goldfish

This section is part of the chapter “A ten-dollar car for ten dollars,” and is one of the few times Sally Gunnar recounts a childhood memory, providing a glimpse into the complicated relationship between Sally and her mother and father. 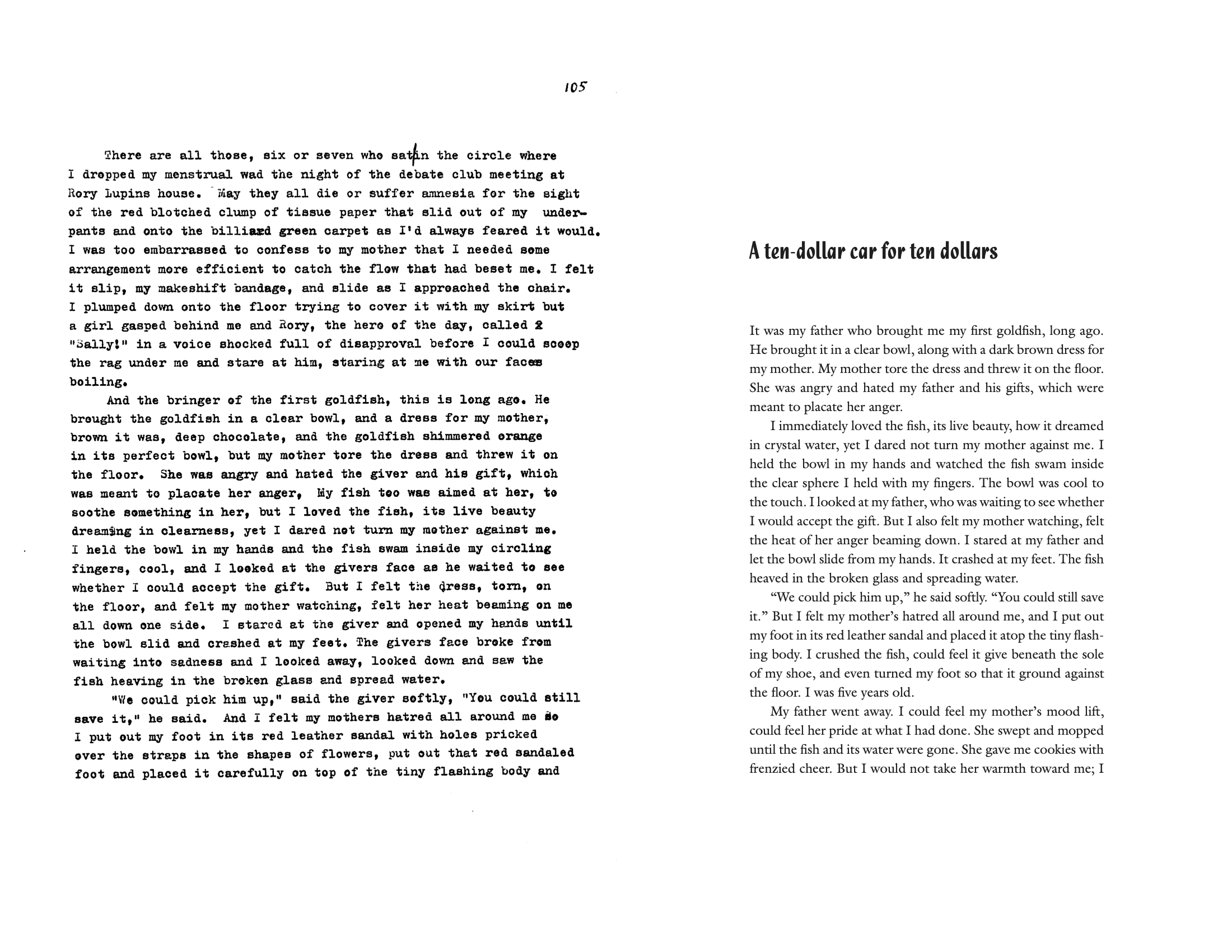 Replaces “bringer of the first goldfish” and “giver” with “father” throughout “Eventually I realized the work of editing Toad was, at least in one very important way, not dissimilar from my experiences editing the novels of living writers; that is, the goal is not necessarily a perfect book, whatever that is, but one that only the writer could have written, and that lingers in the mind of the reader for a long time after they’ve put it down… Toad has claimed its own place … indelible, gnawing, much like Sally’s ‘restless creeping of the worm.’ Long may it creep.” – Huffman

In this section, from “The toad’s poison,” the reader learns more about Sally and her brother’s upbringing and current relationship, as well as some of the significance behind the novel’s title. 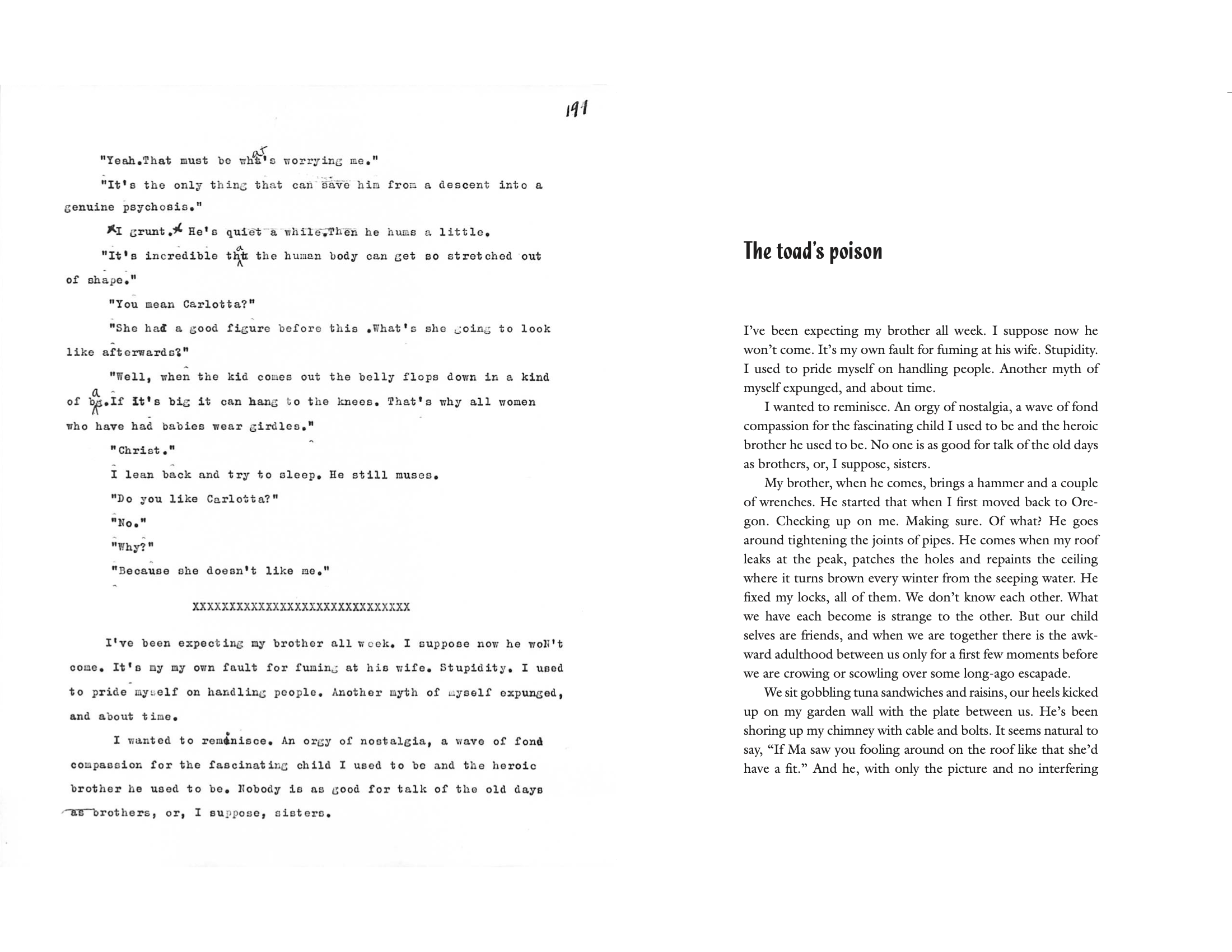 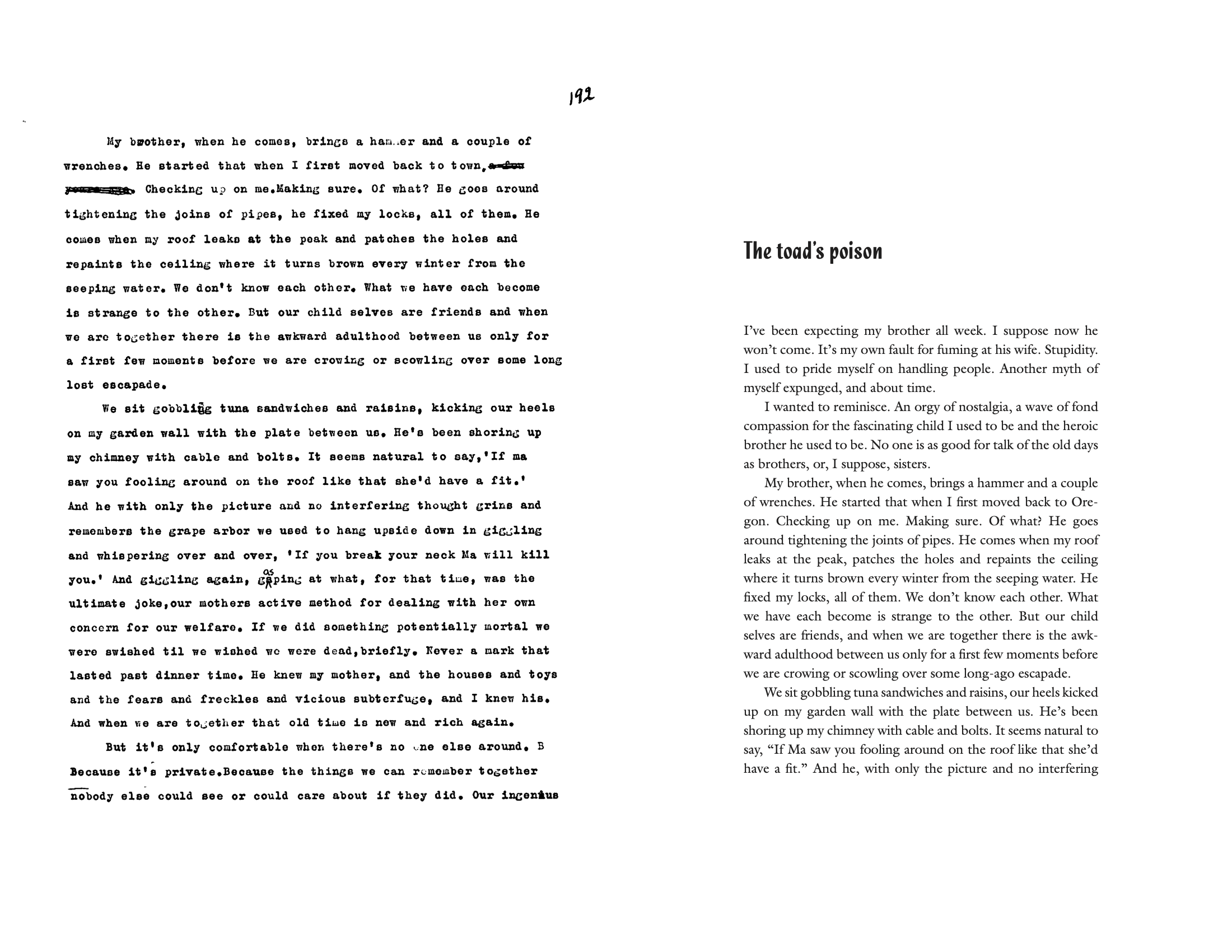 “I was of course very moved by the opportunity to marvel over and study her handwritten notes, cross-outs, and substitutions, to witness firsthand the decisions and considerations she pondered as she wrote.” – Huffman 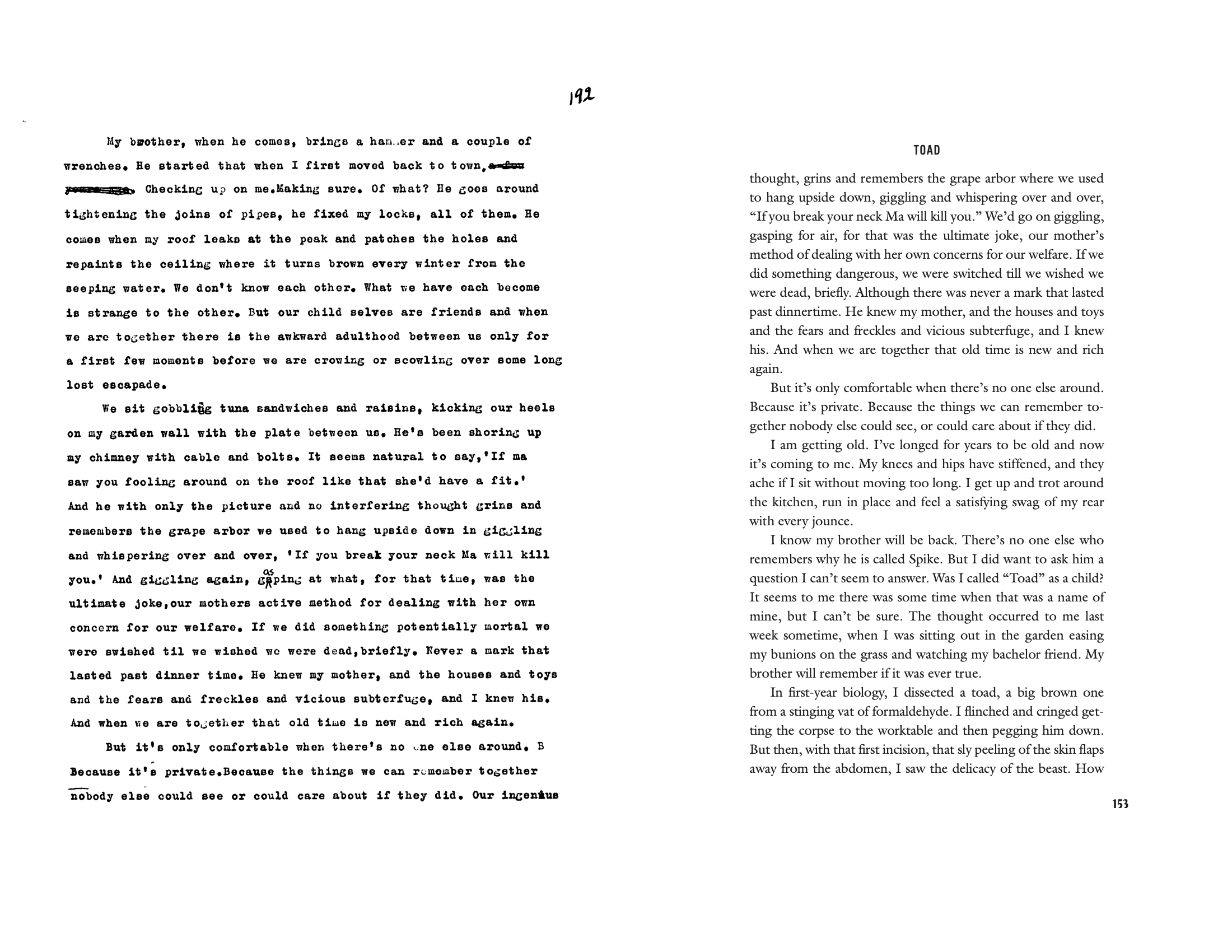 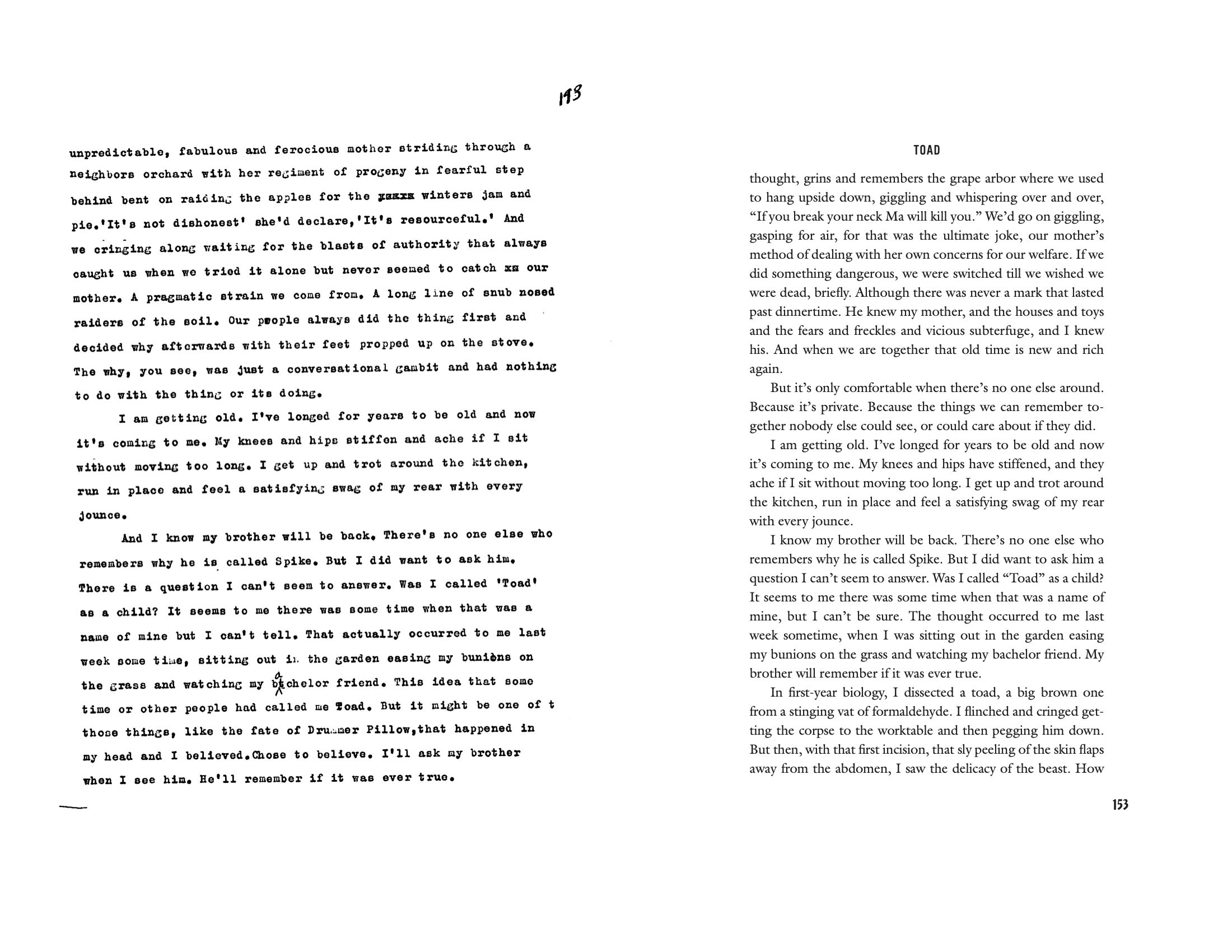 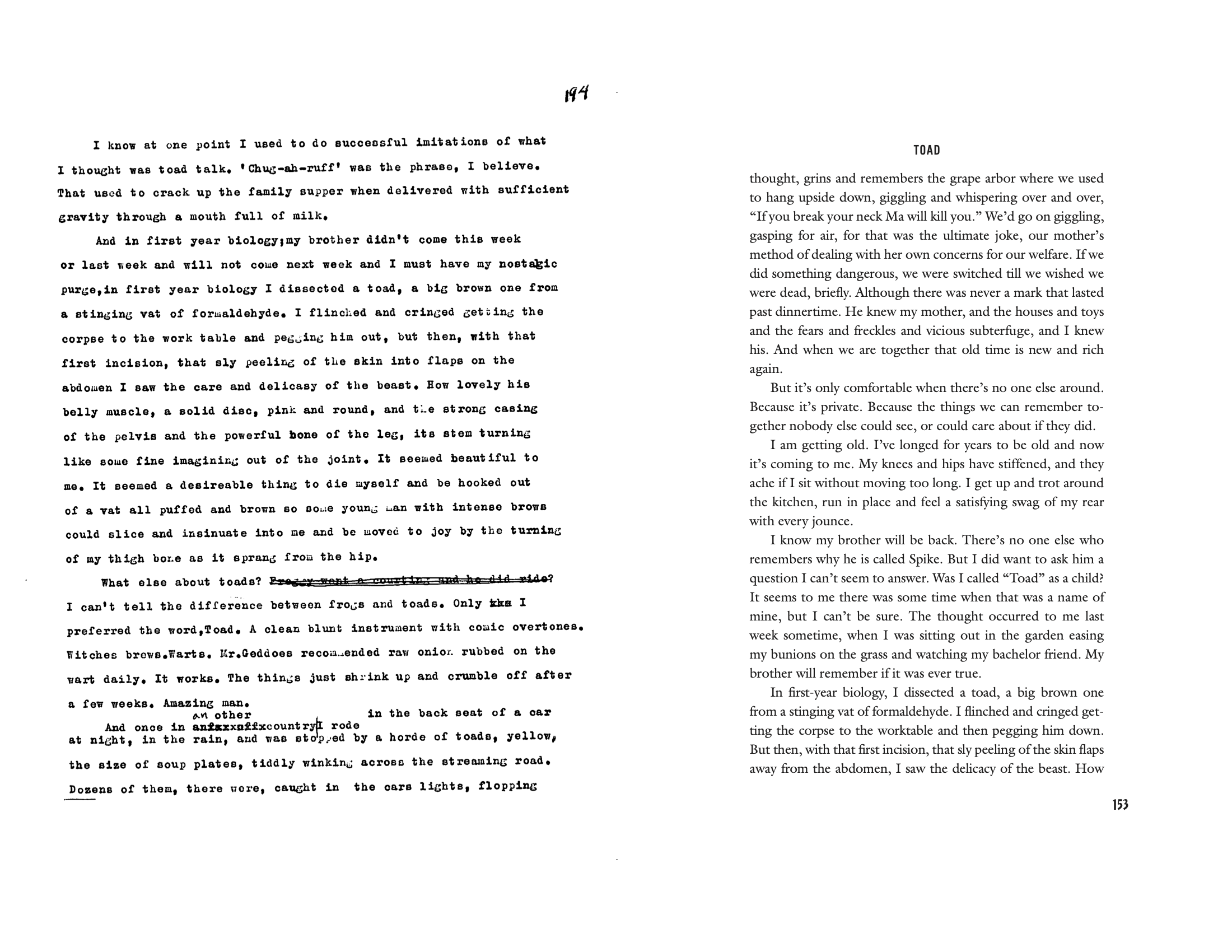 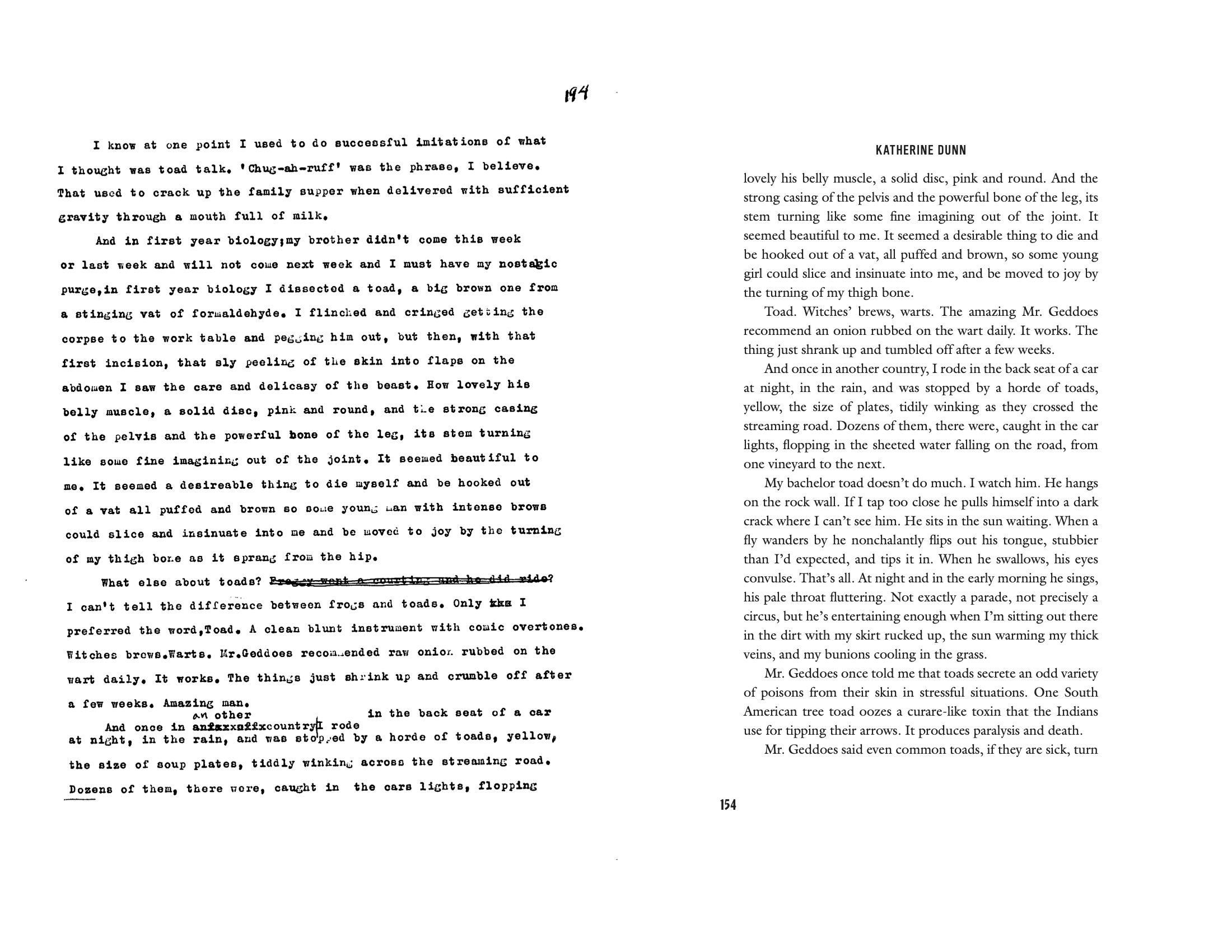 Some description not included

“I felt a keen and enormous responsibility to Dunn to preserve and protect her work, and was stymied by the daunting challenge of attempting to divine her initial intentions in the draft, and by the acknowledgment that I would have to make decisions she had not yet made about her work—or, for that matter, would not have made at all.” – Huffman 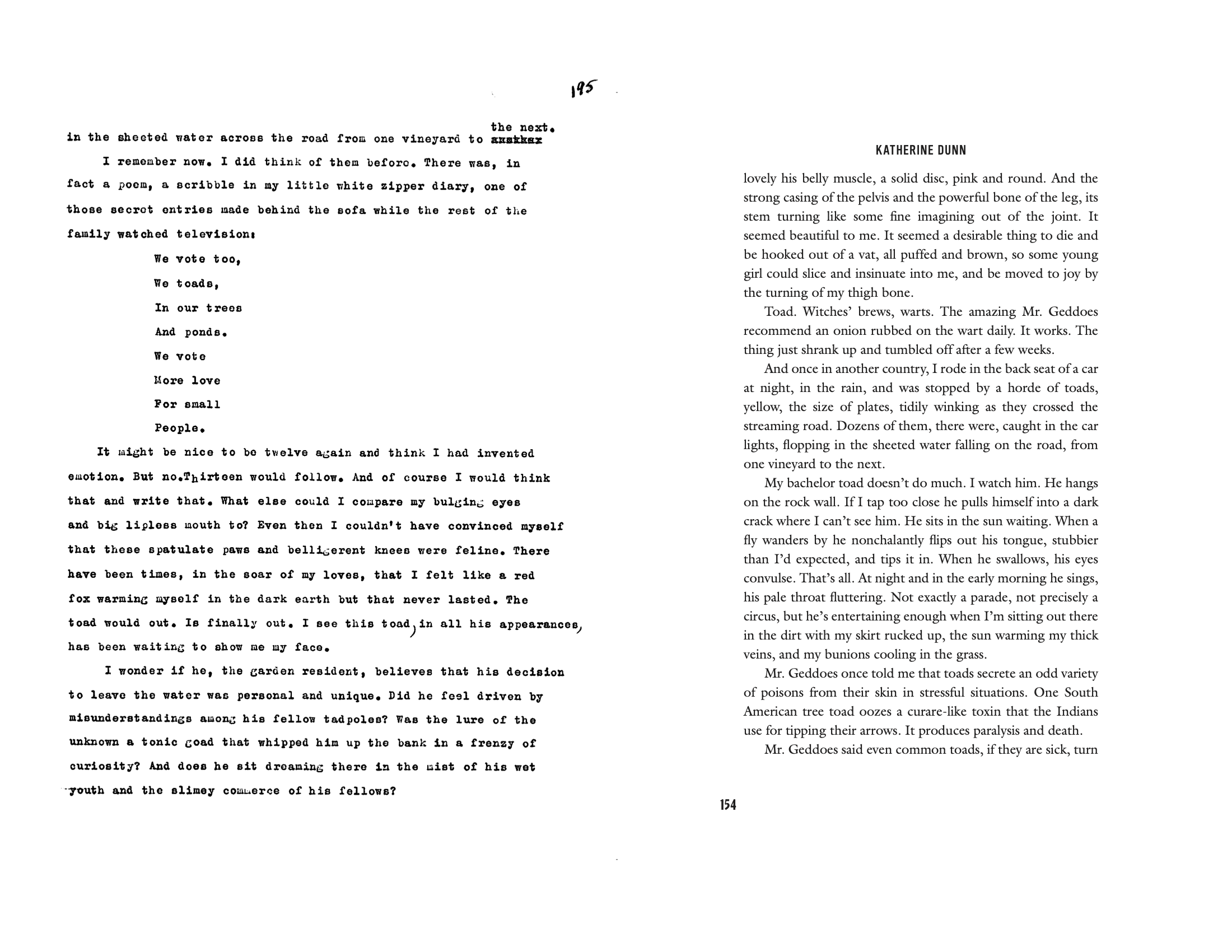 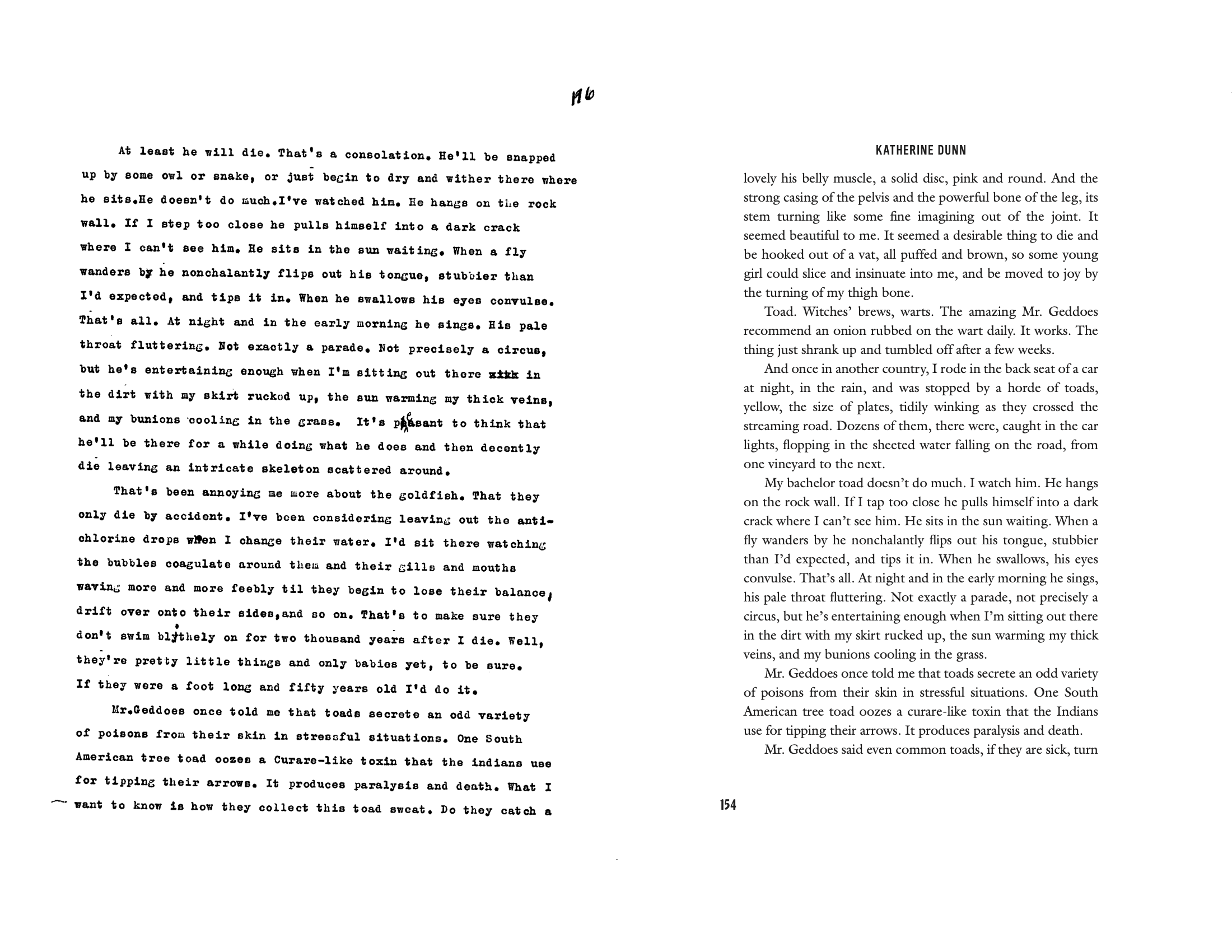